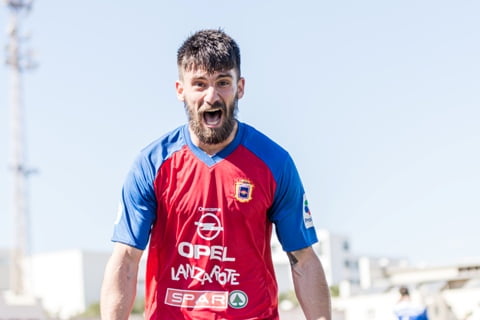 The Rojillos deservedly returned to winning ways on a sweltering hot winter’s day with a victory over our neighbours from Fuerteventura. 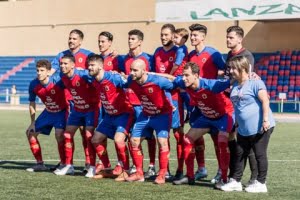 New President of UD Lanzarote Juan Carlos Albuixech would have been delighted with the commitment, determination and the passion that his players showed to move the team three points clear of the relegation positions and up to 14th spot.

The visitors began the better of the two sides and in the 5th minute striker Chata struck a low curling shot from the edge of the box only to find Rojillos keeper Alejandro in fine form as he tipped the ball wide of his left hand post for a corner.

Whilst Unión Puerto enjoyed early possession it was crucial that Lanzarote kept their shape as to not concede an early goal. Ayoze Pérez, Hamza and in particular Miguel Gopar worked overtime in midfield to win the battle in the centre and this was to prove vital for their side as they went on to win their first match in ten outings. 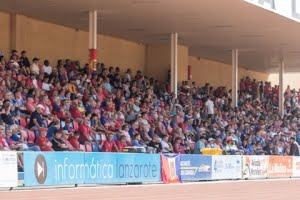 In the 18th minute Ayoze Pérez pulled the ball back to Omar but the centre back who had to wrap his foot around the ball saw his effort fly a metre over the crossbar.

It was that man again Ayoze Pérez who squared the ball in the 18th minute and Hamza let rip from the edge of the 18 yard box. His controlled strike flew beyond the Fuerteventura keeper and into the top right hand corner to give his side a 1-0 half time lead. 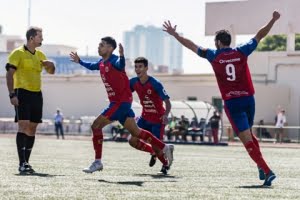 The Rojillos came out for the second period with a burning desire to find that second goal. Rosmen had a reasonable opportunity in the opening minute and even though he struck a half volley with power from 12 yards it lacked the accuracy to worry the keeper.

It was now the time for Miguel Gómez. One had the feeling the Lanzarote winger was up for this match. In the first half he was confident to run at the defence and already had them worried.

In the 52nd minute he ran down the left wing and sent a wicked blistering cross inviting his strikers to get something on it, Rami at the far post took up his invitation and nodded home low at the far post to give his side breathing space with a 2-0 lead. 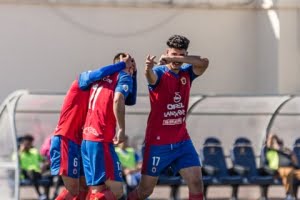 Number 17 Rami with the second goal.

The Majoreros (Fuerteventurians) came close to responding two minutes later. A free kick by striker Sandro forced Alejandro into another full stretch diving save and in doing so helped to restore composure into his side. 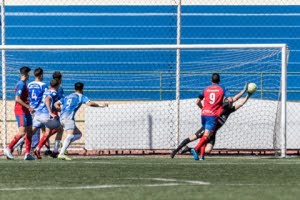 Rojillos keeper Alejandro pulling off a terrific save at a crucial time.

Throughout the whole match the Lanzarote captain Rosmen led his side with the desire that we have all come to expect from the Lanzarote Talisman.

I do believe that the club needs to check his birth certificate because this supposedly 39 year old veteran was running and battling like a teenager. This gentle giant had only finished his work with underprivileged children at 8am, went home to change then joined his team mates for breakfast at the Sands Resort in Costa Teguise. 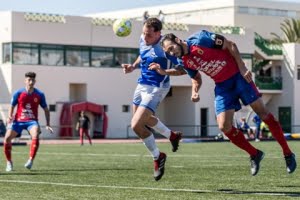 His 90 minute shift included chasing down and winning lost causes and really setting the tone on the importance of this match to his players. Only a hardened skeptic would say that this man cannot compete at this level next season.

The visitors again enjoyed possession and looked sharp in midfield but in the final third the Rojillo defence weren’t giving an inch to allow a route back into the match.

Ten minutes from time Lanzarote came close to extending their lead, Alex Fuentes curled a free kick around the wall from the edge of the box but the Fuerteventura keeper Paquito produced a brilliant save tipping the ball wide of his left hand post.

As the daytime temperature peaked at 30 degrees Unión Puerto ran out of ideas and Lanzarote celebrated this long awaited victory along with their fans as though they had just won the league title. 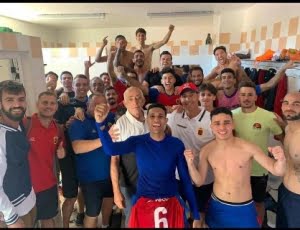 Next Sunday Lanzarote have a real opportunity to put daylight between them and the relegation positions when they travel to Gran Canaria to face bottom club UD Villa Santa Brígida.